The exceptional regenerative power of starfish for a healthy, youthful-looking skin 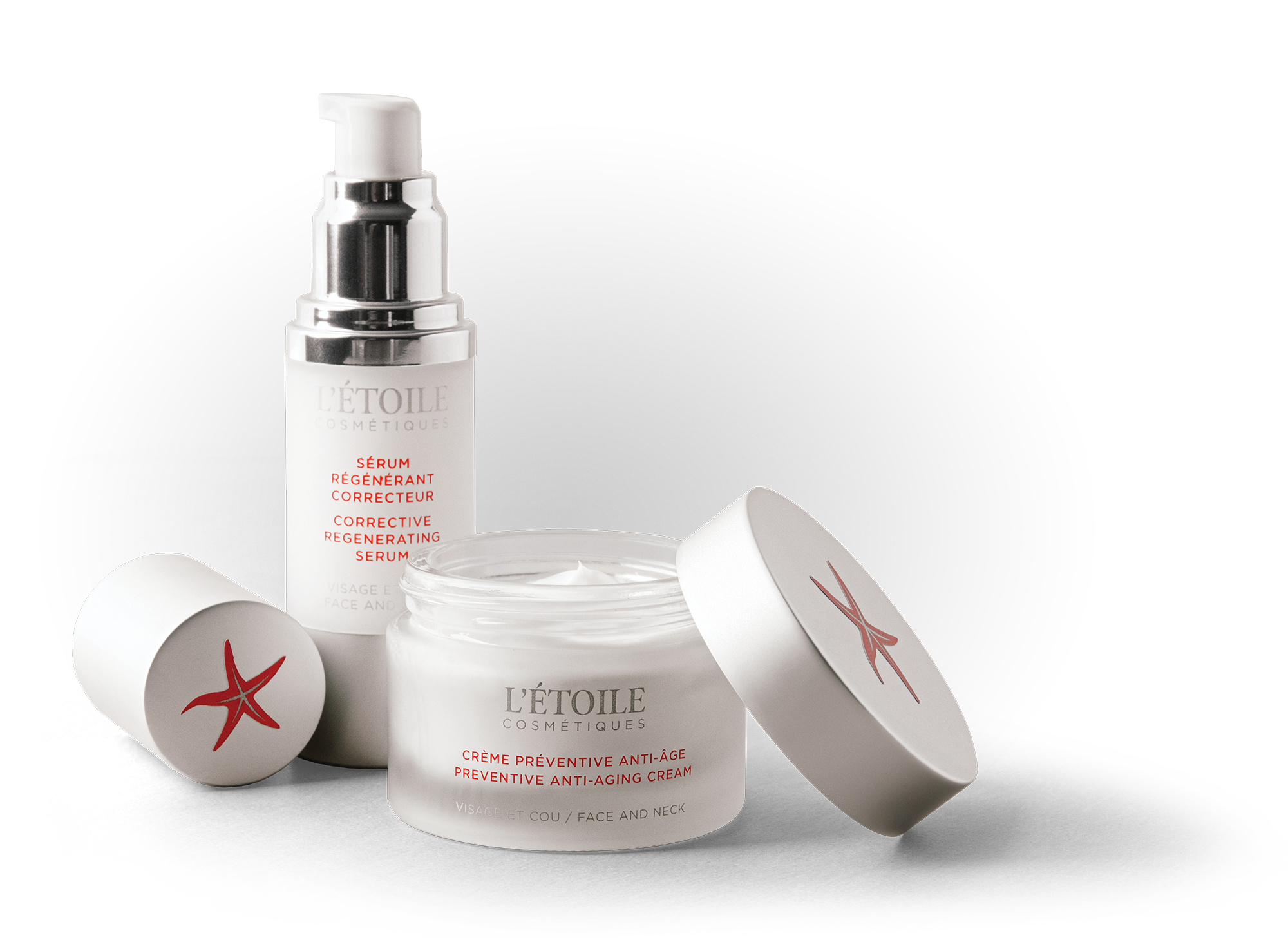 Be beautiful for Christmas! 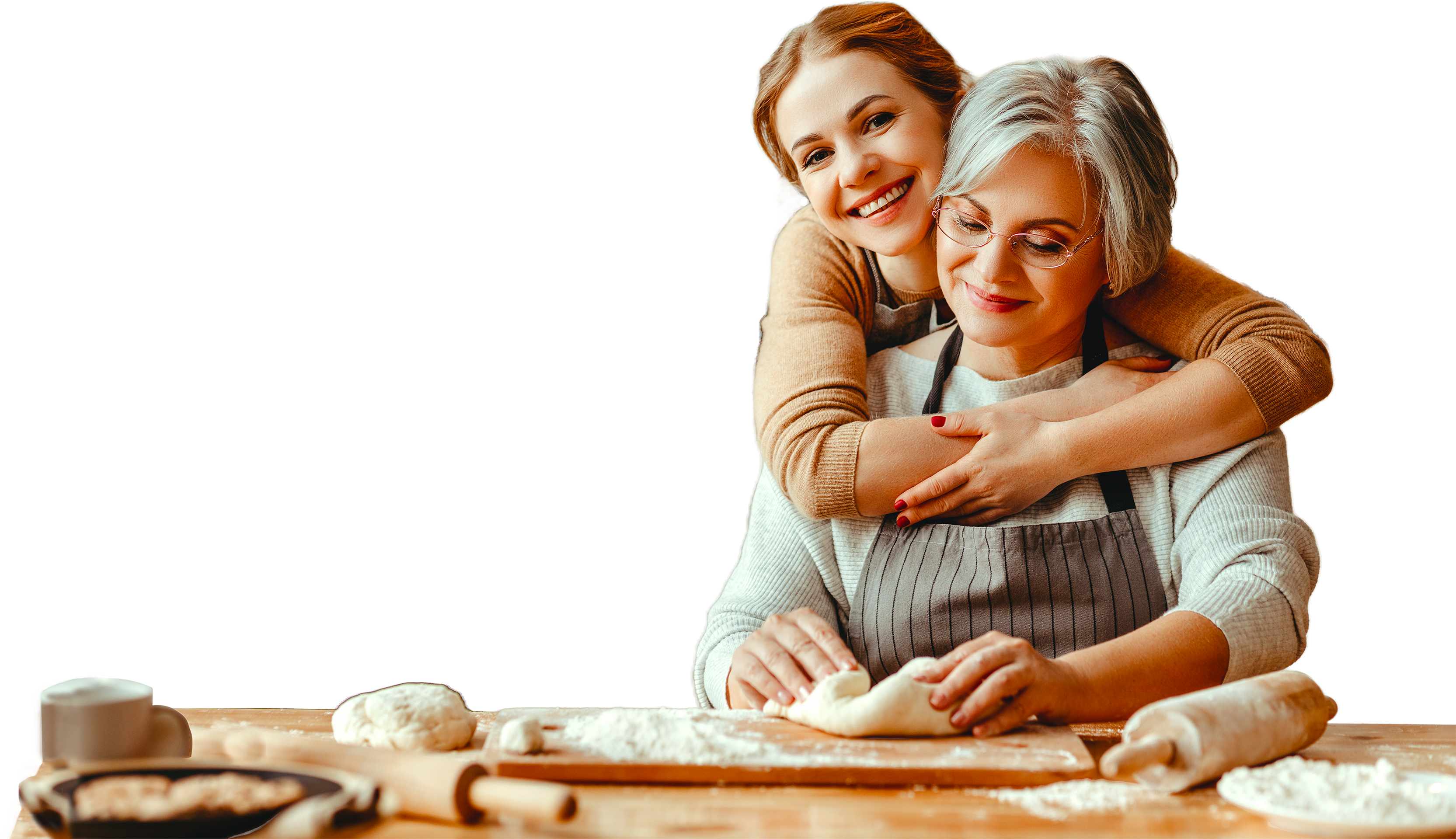 Summer has flown by, autumn is setting in.
So we want to treat you!

L’ÉTOILE COSMÉTIQUES Preventive Anti-Aging Cream contains a high concentration of the patented technology JUVENTIDE®. This light cream provides intense hydration, firms up and smoothes the skin by stimulating the essential functions of the skin. It is ideal for:

Not tested on animals • Paraben-free • All skin types

L’ÉTOILE COSMÉTIQUES Corrective Regenerating Serum has a light and fluid texture, as well as an optimized concentration of the patented technology JUVENTIDE®. This serum penetrates instantly to revitalize the skin and its natural glow, to significantly reduce the appearance of wrinkles and fine lines and to offer an immediate tensing effect. It is recommended for:

The perfect combination to hydrate and tone your skin

L’ÉTOILE COSMÉTIQUES box set contains the corrective regenerating serum and anti-aging preventive cream, suitable for all skin types. This duo is the perfect combination to hydrate and tone your skin, while reducing the appearance of fine lines and wrinkles. 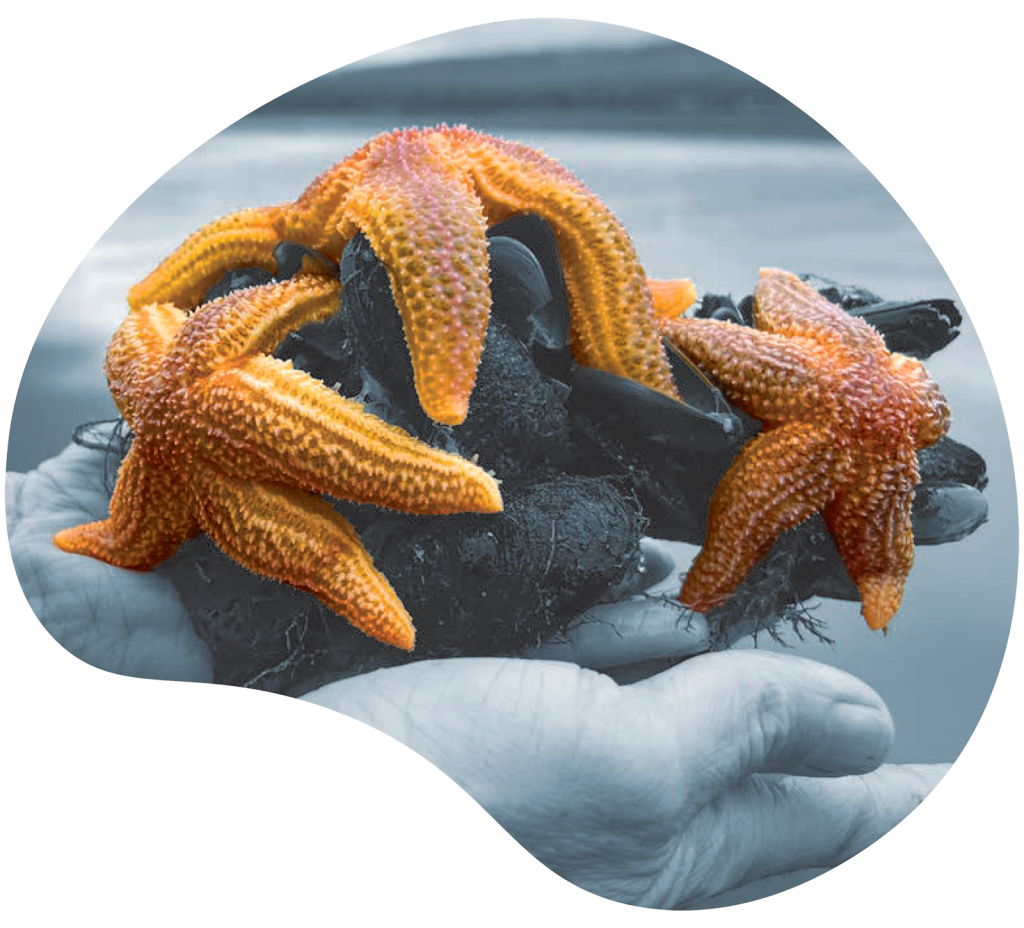 But where does this exceptional regenerative power of starfish come from?

The answer can be found in the coelomic fluid of starfish Asterias vulgaris, which is harvested according to the principles of the circular economy in the cold, pure waters of the Gulf of St. Lawrence.

Coelomic fluid not only allows stars to regenerate, but it also contains molecules with anti-inflammatory and antimicrobial properties that are of interest to scientists around the world!

Clinical results that scientifically demonstrate the reduction of wrinkles, the regeneration of the epidermis, better healing, as well as an increase in the firmness, elasticity and hydration of the skin.

Products developed and made in Quebec, recommended for women, men and for all skin types.

Not tested on animals and paraben-free. 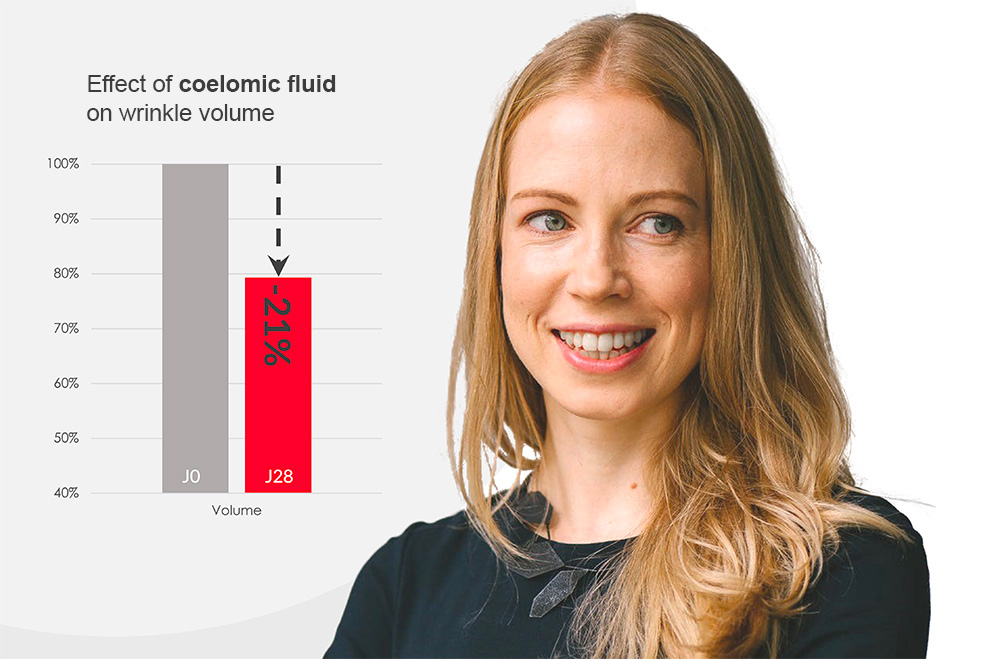 PROMOTION FOR THE HOLIDAY PERIOD!!! 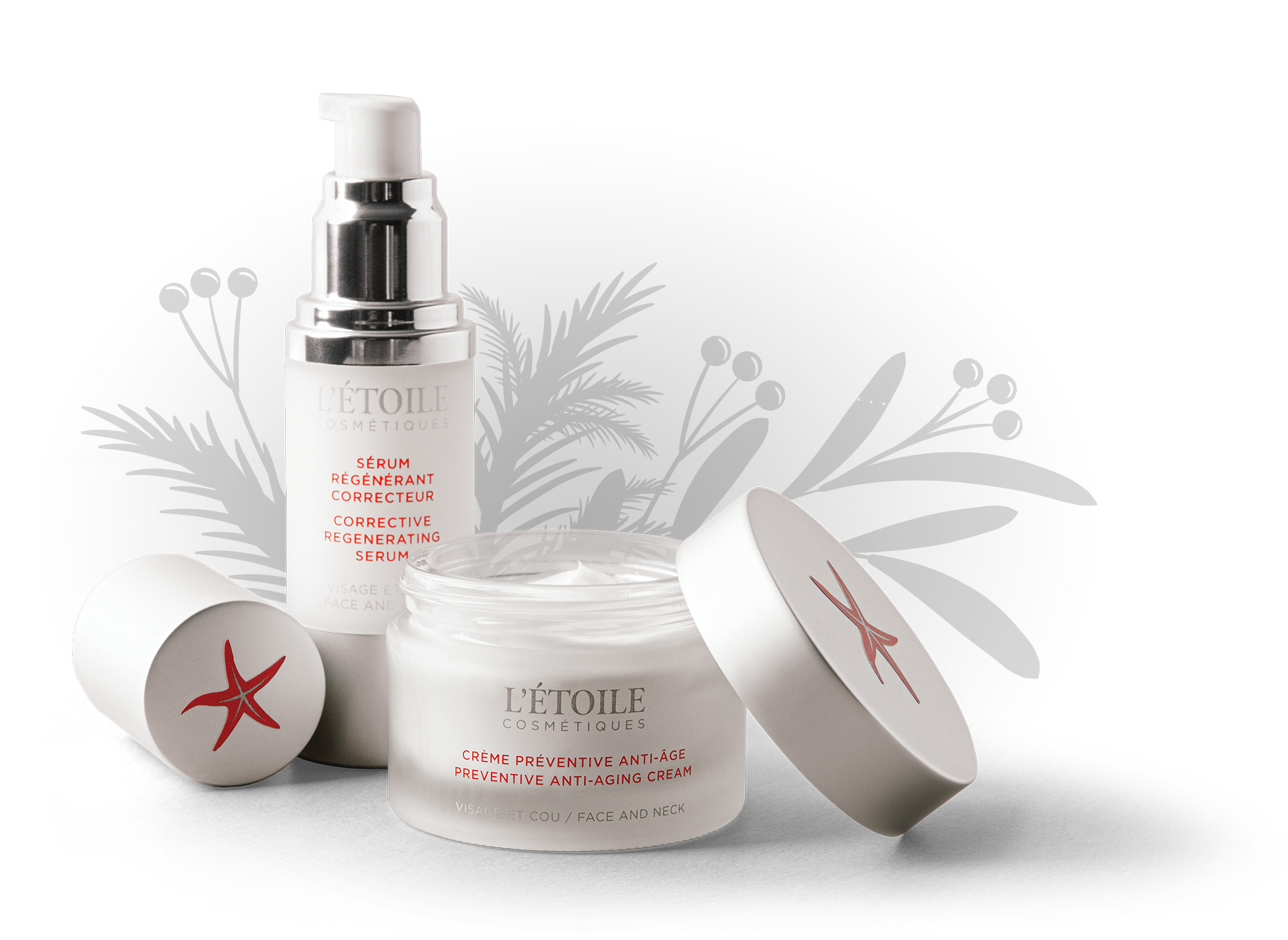 L’ÉTOILE COSMÉTIQUES is driven by a single passion: to design innovative dermocosmetic treatments based on the exceptional regenerative power of the starfish Asterias vulgaris, living in the cold waters of the Atlantic Ocean. The unique regenerative capacity of this starfish sparked an ambitious scientific program that culminated with the issuance of international patents. Building upon its eco-responsible and sustainable harvesting process having no impact on starfish or its ecosystem, L’ÉTOILE COSMETIQUES is proud to contribute to the valorization of this exceptional marine resource. 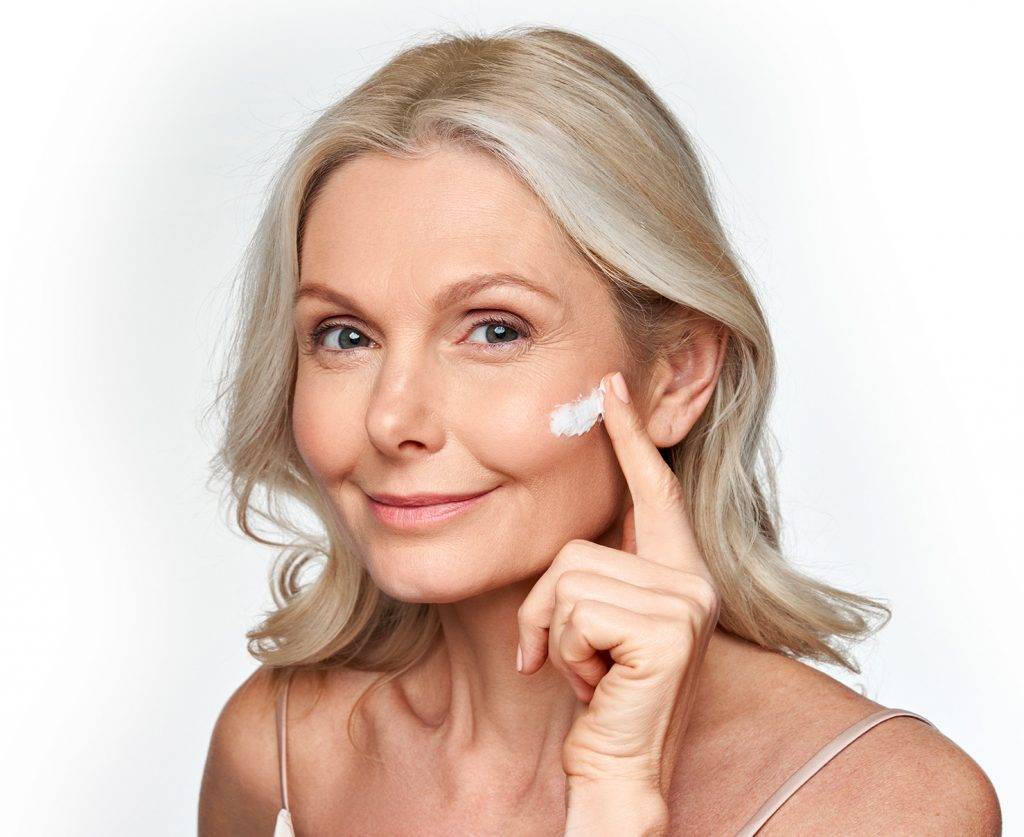 LOCAL PRODUCTS,
MADE IN QUEBEC

Designed and manufactured in Quebec, L’ÉTOILE COSMÉTIQUES is a line of skin care products based on the following principles:

L’ÉTOILE COSMÉTIQUES products are available online, here on this website, and in the network of beauty centers and institutes only. 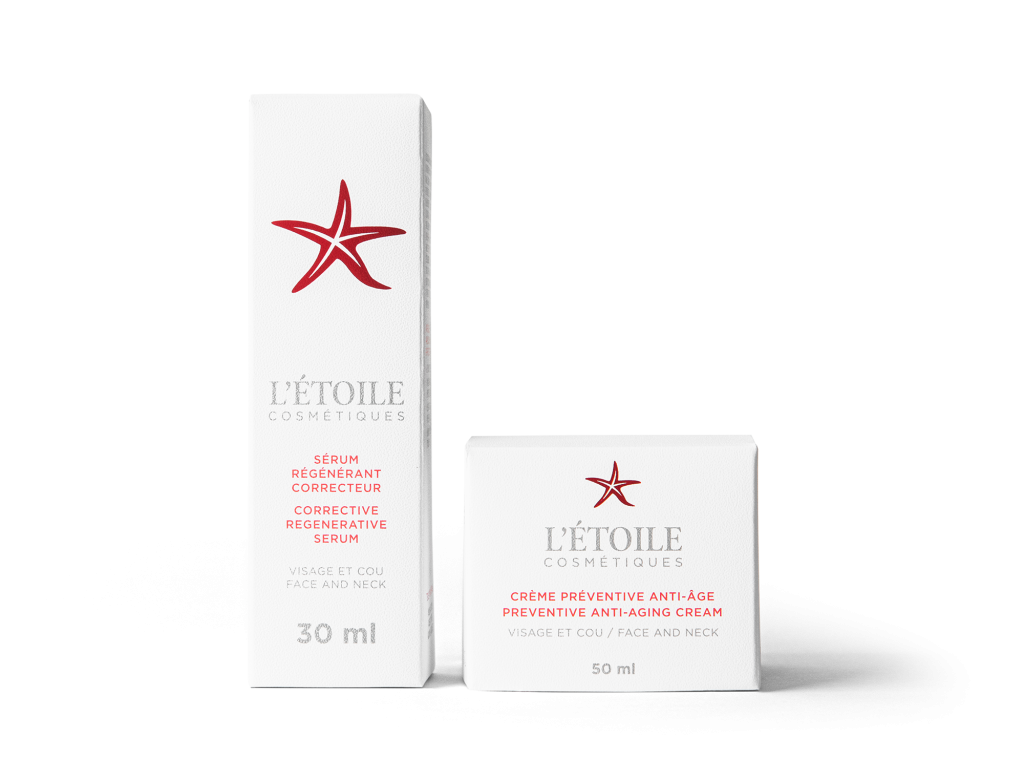 We surveyed women between the ages of 35 and 60, who applied L’ÉTOILE COSMÉTIQUES cream morning and night for two weeks. After only one week of application, 96% of them reported that the skin on their face was better hydrated, 87% reported that they felt their skin was firmer and more elastic and 83% said that the appearance of their wrinkles had diminished.

After two weeks of application, 95% of these women reported experiencing better hydration of their skin, 95% said their skin was firmer and more elastic, while 91% said they perceived a significant decrease in the appearance of their wrinkles.

In a second study of women aged 40 to 69 who applied L’ÉTOILE COSMÉTIQUES twice a day, morning and night, for 28 days, 100% of the women surveyed said that L’ÉTOILE COSMÉTIQUES cream penetrated quickly and that they found the texture and light grapefruit scent of this product pleasant.

I wish long life to your cosmetic discovery! My skin is luminous, less oily, more balanced, I finally discovered a product that perfectly suits me. 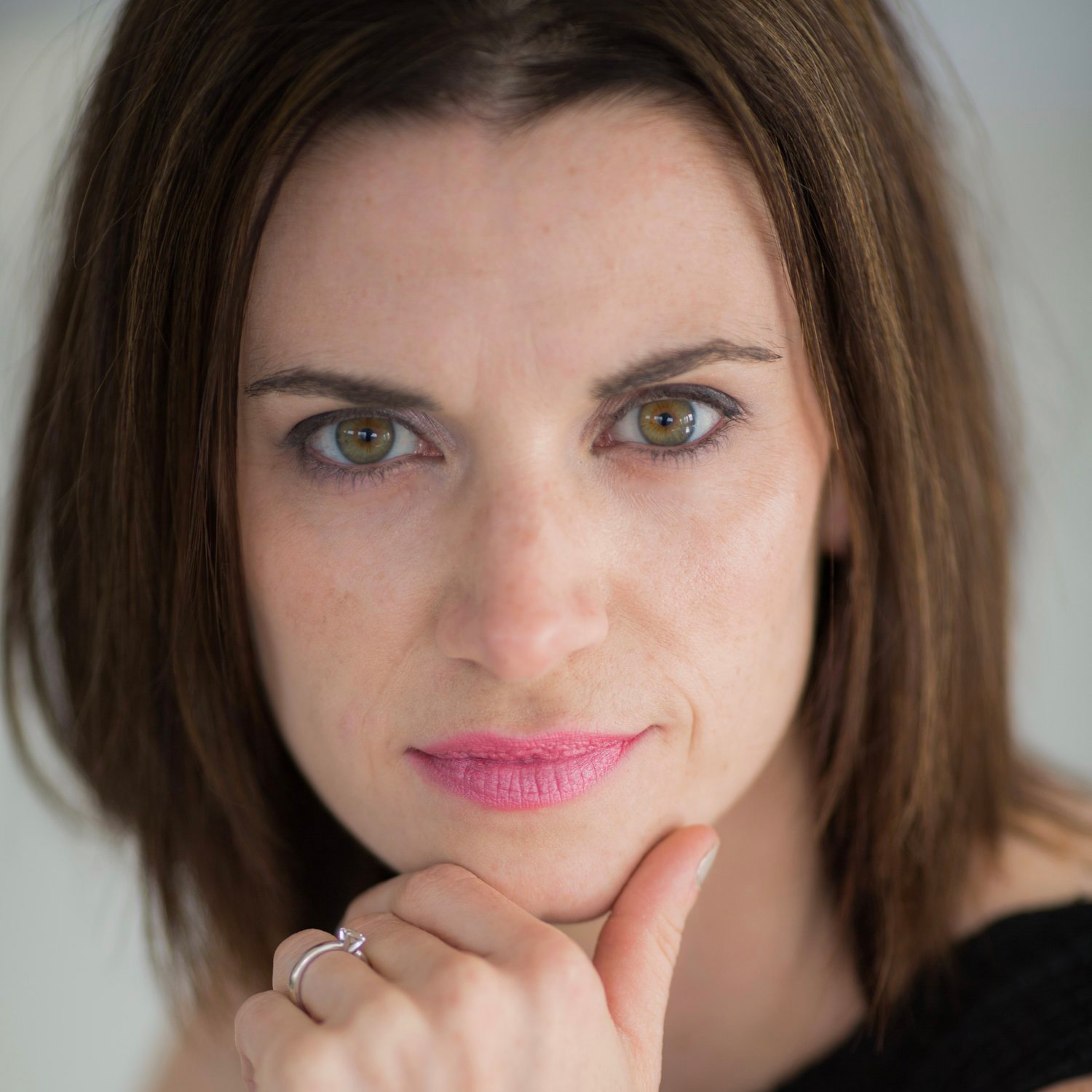 Cindy LeclercBoucherville
What a great discovery L’ÉTOILE COSMÉTIQUES is. Many of my clients are fans of this magnificent product. From the very first application, you get a sensation of freshness and comfort, as well as a luminous skin tone! It is a product with excellent regenerating properties. 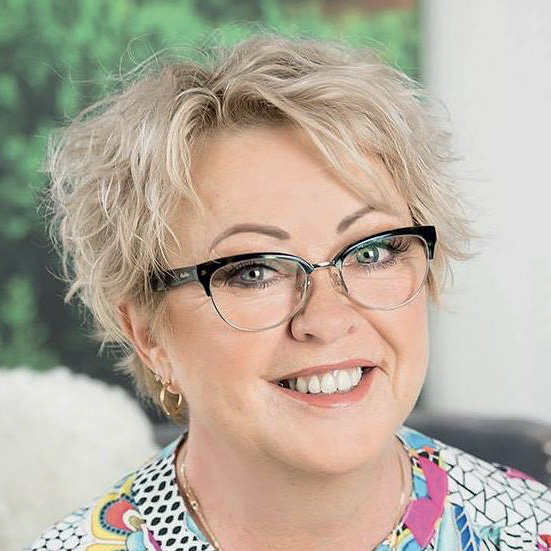 Denise BordeleauBeautician, Rouyn-Noranda
I had the privilege of trying this very effective product. I am 63 years old and after only 5 weeks, some clients pointed out to me that the skin on my face seemed refreshed.

For me, it's now my lifetime product. Thanks to L'Étoile Cosmétiques and innoVactiv for this discovery. 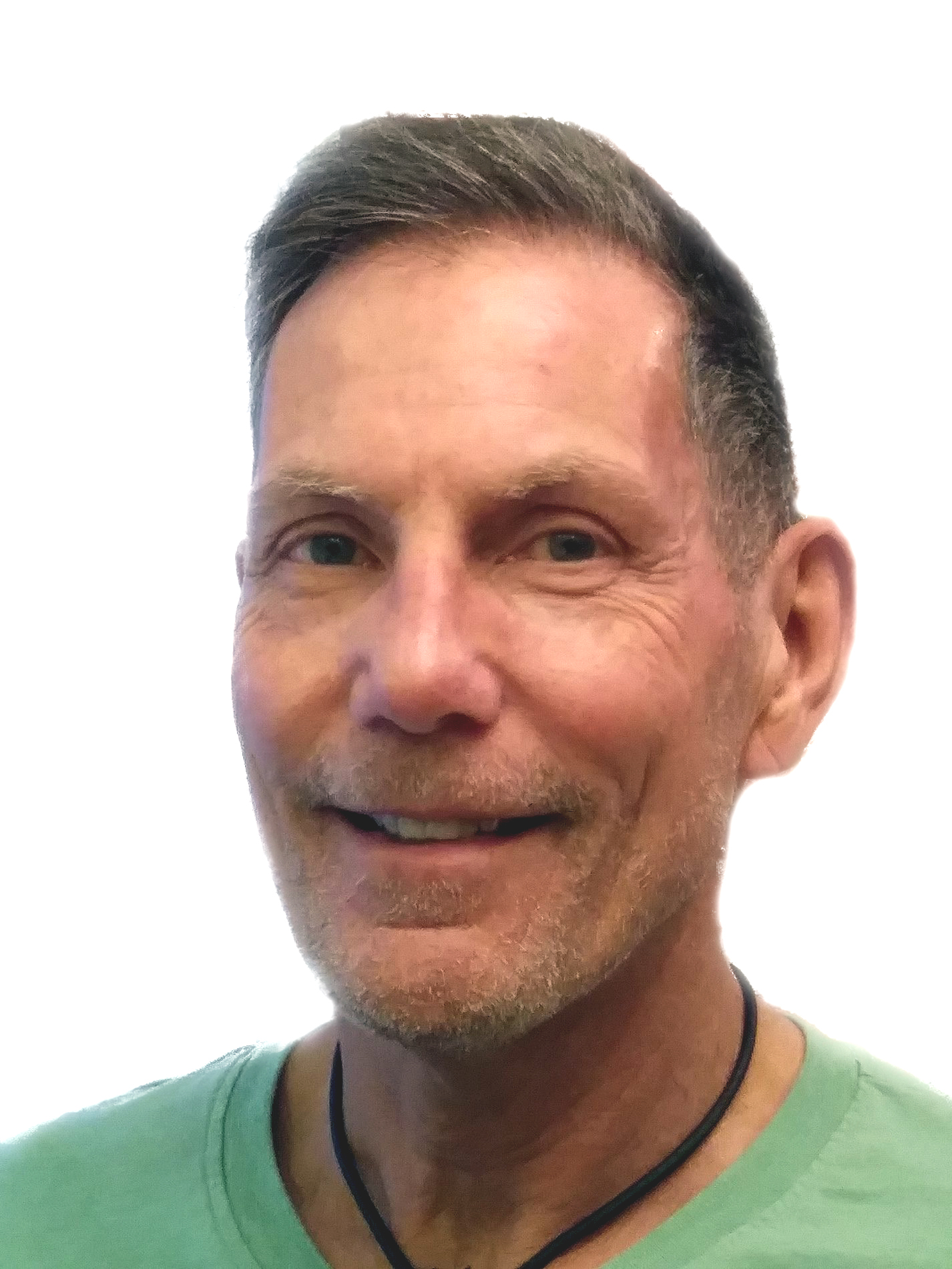 Michel HébertQuébec
I love these products which quickly improved the hydration and the plumpness of my skin.

Thanks to L'Étoile Cosmétiques and innoVactiv for this discovery. 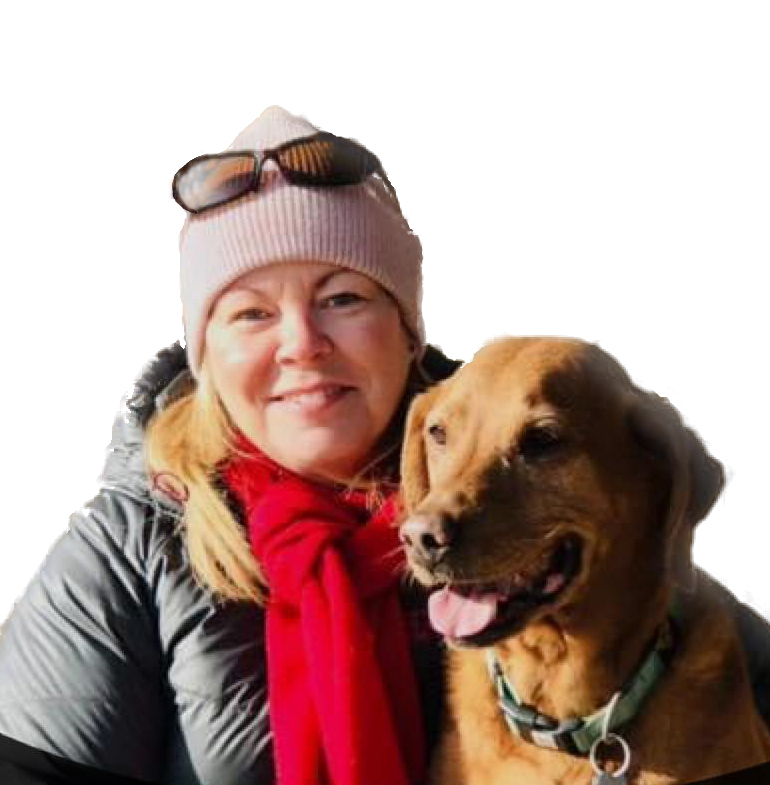 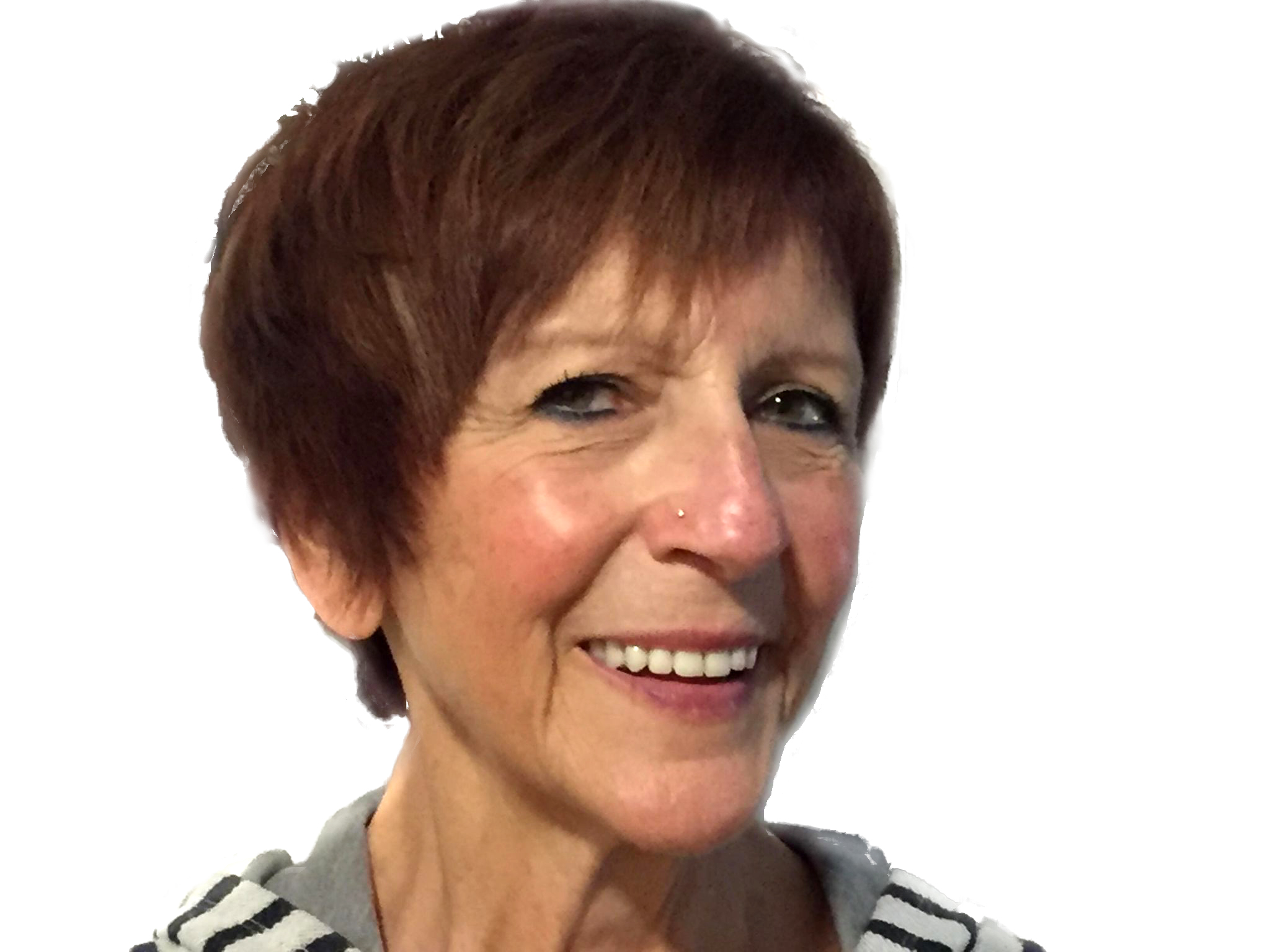 Diane GoyetteSt-Jean-sur-Richelieu
I have been a practicing beautician for 41 years. What can I say in a few words about this 5-armed wonder; if it loses one, it will grow back in 1 month, that’s the length of the natural skin renewal cycle. The 5 is also the symbol of mankind; the 5 extremities of the human body, the 5 senses, the 5 fingers of the hand, etc. I particularly like the serum and cream from L’ÉTOILE COSMÉTIQUES, which have a very pleasant texture and smell when applied in addition to participating in cellular regeneration to advance in age beautifully.

Micheline GarneauBeautician, Lévis
It is with great pleasure that I confide in you that I have become "addicted" to "L'étoile Cosmétique" products! I am a 73 year old senior citizen, and I have been using these products for about two years. The flexibility of my skin, which had disappeared for a long time, has returned little by little, thanks to the L'étoile Serum and cream. I highly recommend them to everyone! 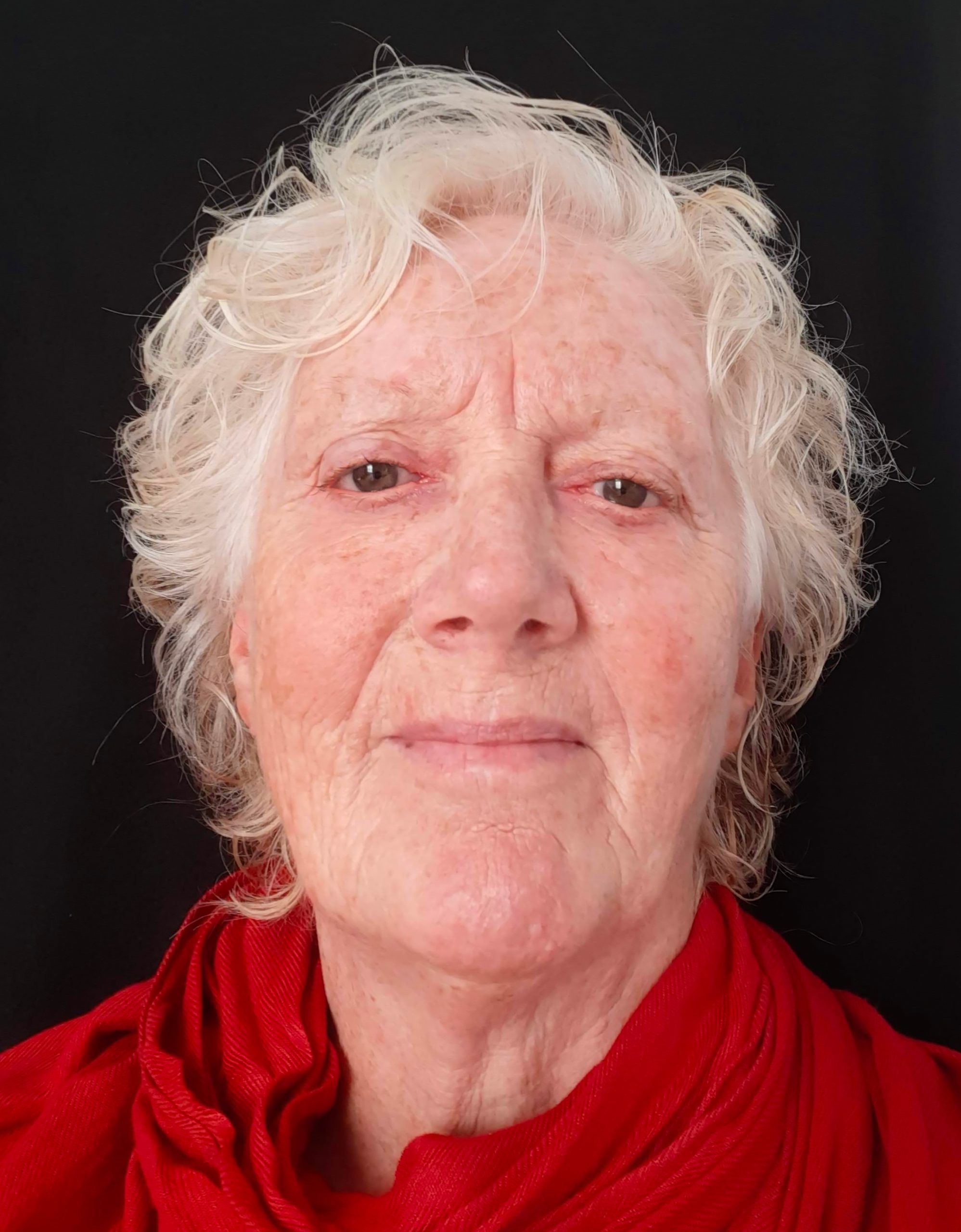 L’ÉTOILE COSMÉTIQUES products are also available in the network of esthetics and beauty institutes.